Learn how to build, test, deploy, and monitor your React Static app with GitLab Auto DevOps and Cloud Native Buildpacks with Paketo

React Static is a great way to take the robust front-end SPA framework many developers know and love, React.js, and couple it with a static website engine to improve overall UX and SEO. Use the same reusable components, polymorphism, hooks, etc. you would normally use, but render the website down to individual HTML, CSS, and JS pages and build site metadata. This way, web scrappers can quickly load each individual page and read the important tags, metadata, and links, something that a SPA can't do.

In most cases, React Static's built artifacts are published to a web server like NGINX or pushed to a blobstore like S3, but sometimes you might want to bundle the pre-rendered HTML, CSS, and JS inside a container to run inside of existing or familiar tools like Docker or Kubernetes without sacrificing the UX and SEO benefits. This is where the buildpack approach will come in handy. Plus, GitLab Auto DevOps is already configured to containerize your application using either Docker or Buildpacks.

GitLab is a robust DevOps platform that allows development teams to manage all aspects of their projects, from backlog management to version control, from build automation to vulnerability scanning, from continuous deployments to app monitoring. Essentially, everything you need to shift security and operations left into your automation workflow is included in GitLab.

One of the most powerful components of Gitlab is Auto DevOps. It uses an already power CI engine to provide out-of-the-box, batteries included but swapable, CI/CD pipeline. This pipeline is pre-configured to build your app into a container image, scan and test it, and deploy it to production - all without having to write or maintain that pipeline yourself.

When containerizing an application, it's quite typical to use a Dockerfile. It can be very declaratively explicit and lets you run various build or setup commands before your app is fully bundled in an ephemeral container image. One struggle that comes with Dockerfiles is they tend to be very stale. The base image you start with is typically the base image you use for a very long time. Unless something breaks or a big vulnerability is detected, most people don't touch it.

Cloud Native Buildpacks automate building an app in a container image. You provide the source code, and the base image and runtime bits needed to run your app are automatically provided. This means you can rest easy knowing with each build of your app, you have the latest and greatest working stack, and you never have to manage a Dockerfile.

If you haven't already, you will want to create a new React Static application.

To take advantage of GitLab Auto DevOps, you will need to create a free GitLab.com account and create a repo.

Once you have an account created, create an empty project, uncheck Initialize repository with a README, and follow the instructions GitLab provides for Push an existing folder, which should look similar to the following:

In order to fully deploy your application with GitLab Auto DevOps, you do need GitLab connected to a Kubernetes cluster. You can skip this step if you only want to build the container image and deploy on your own. Otherwise, you can follow the instructions to connect an existing Kubernetes cluster or to create a new one in this GitLab article.

The out-of-the-box scripts generally don't need to be touched, but one of the best ways to start using Cloud Native Buildpacks requires using Node.js to be the web server rather than moving the static output of a React Static bundle to an existing web server. The buildpack will detect the project is a Node.js app and will assume the npm start command will start up a server and port-bind to the PORT environment variable. Additionally, since React Static comes with the serve dev dependency, it's easily repurposed to serve the final build.

Because a React app is treated as a Node application, the pack CLI assumes the npm start script is used to run the built version of your app. Because of this, the buildpack would try to run the default react-static start, which will not render the app statically down to HTML, CSS, and JS. You are essentially missing the benefits of React Static at that point. You will have an easier time if you change the start command in package.json to be:

In lieu of the original npm start script, make a new npm run dev script by adding the following to the scripts in package.json:

3. Move serve from devDependencies to dependencies

Now that the npm start script references serve, you need to move it the dependencies list so it is included in the final build.

If you want to deploy this containerized app in multiple locations with different domains, you probably don't want the hardcoded URL that React Static adds to the HTML files, so you will want to add the --staging flag to the npm run build script.

It's highly recommended to try the build locally so you can troubleshoot issues faster, like if an npm script doesn't run as expected. If you want to roll the dice, you can skip this step.

To test the containerization locally, you will need to have Docker and pack installed.

With both installed and the Docker daemon running, run the following inside your project directory:

To breakdown what's running, Paketo is a specific set of buildpacks and builders, and in this case, it does a great job allowing you to define how to buld the app.

BP_NODE_RUN_SCRIPTS tells the builder to run npm run build prior to bundling the app as a container, so after it runs, the container image should have the dist directory included.

With the code pushed to a GitLab repository, go to the projects Settings > CI/CD. 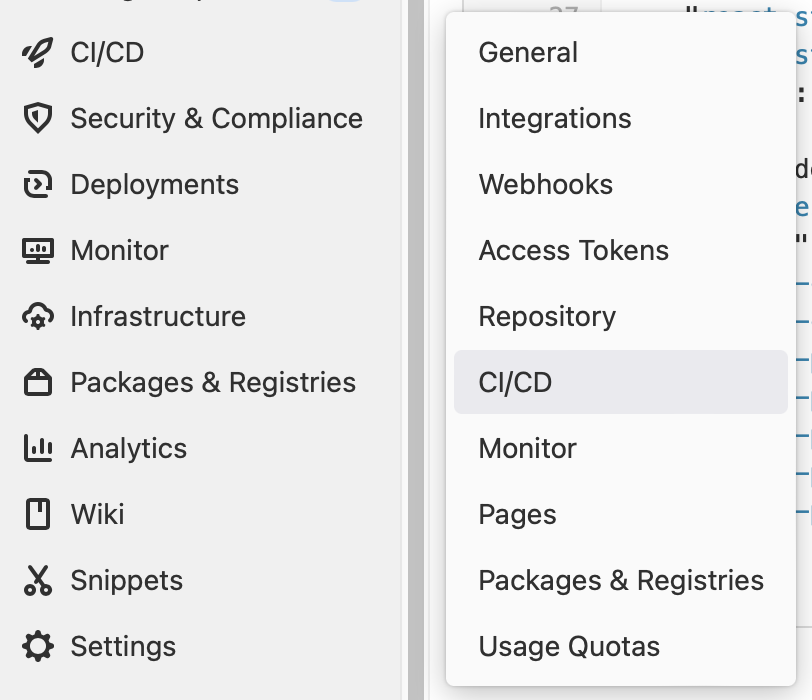 Before enabling Auto DevOps, expand Variables. For each of the following, click Add variable, and in the form, set the values below:

These variables tell GitLab Auto DevOps to use:

Now expand Auto DevOps and click Default to Auto DevOps pipeline and select one of the Deployment strategy options.

After clicking Save changes, a pipeline should be triggered automatically.

With Auto DevOps enabled, your pipeline should run successfully. 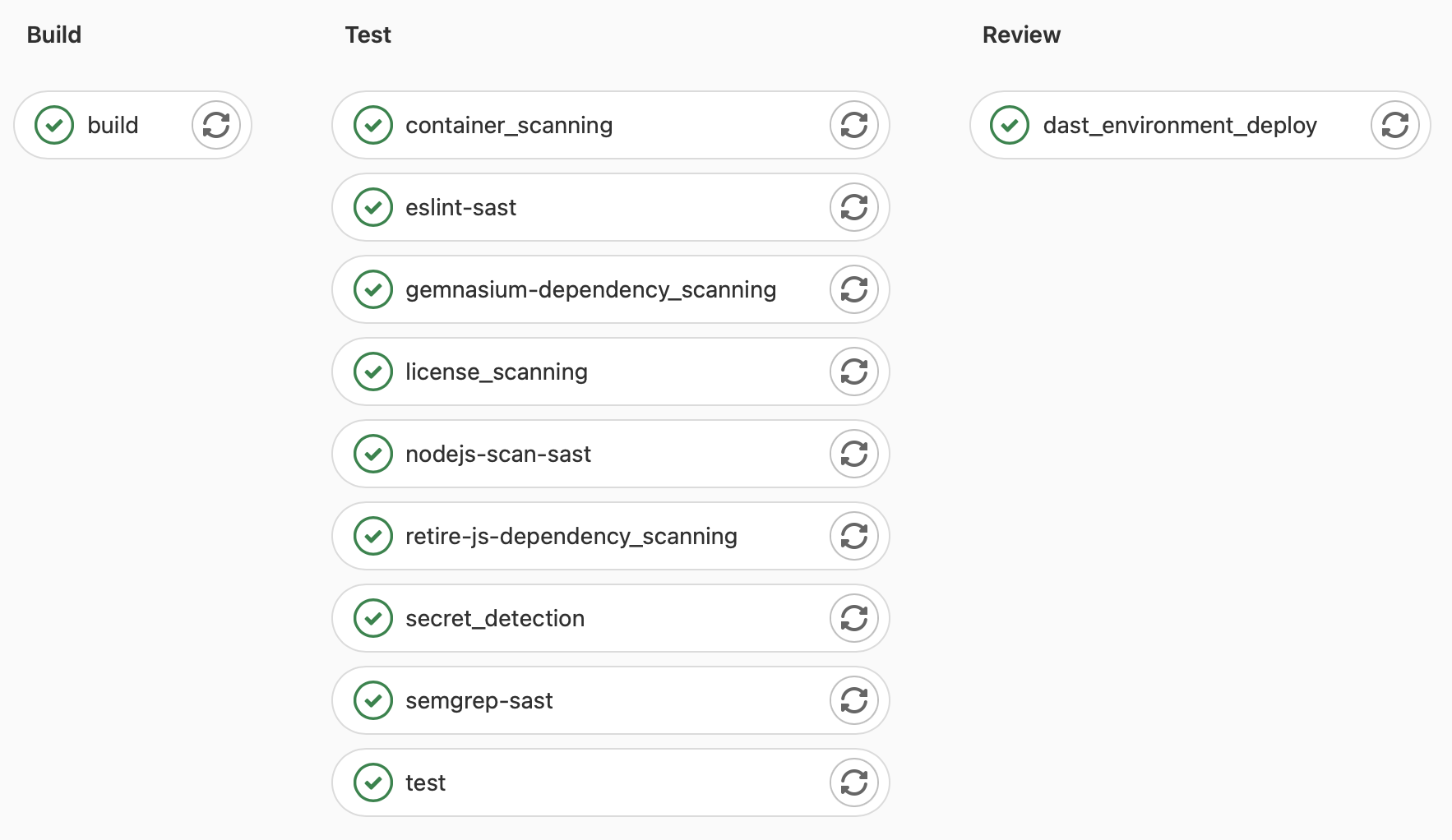 If you configured a Kubernetes cluster with Auto DevOps, you should now have a deployed version of your application. To access it, you could go to Deployments > Environments to open a link. You can also inspect your cluster for either a newly created namespace or a namespace you configured with the KUBE_NAMESPACE environment variable. In there, you should see a new deployment, the deployment's pods, a service, and an ingress route.

If you did not configure a Kubernetes cluster with Auto DevOps, you should still have access to your built container image inside GitLab's container registry. You can find it in Packages & Registries > Container Registries.